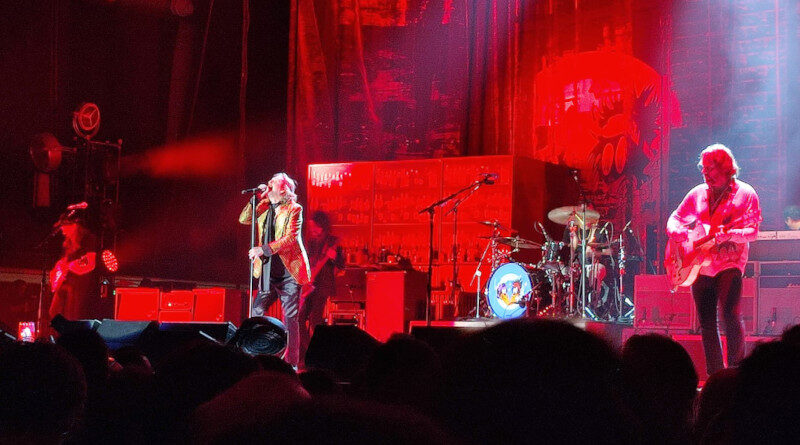 Reading the daily headlines about geopolitical tensions between the two countries with the largest nuclear stockpiles in the world can be disorienting, whooshing us back to almost any decade in the second half of the last century, confirming the idea that little has changed.

On Sunday night in Barcelona, the atmosphere at the Black Crowes  concert, twice postponed due to Covid-19, was equally unhelpful in stationing us in a definite era. Lead vocalist and lyricist Chris Robinson  and his brother Rich, composer and rhythm guitarist, donned rakish blazers over partially buttoned shirts from which chest hairs prodded the capacity crowd. A section of the stage set was constructed to resemble a juke joint. Its bar was overseen by a gent in an exhilarating salmon-pink tuxedo with a generously ruffled dickey; like any honest barkeep, he stole clandestine nips from his wares throughout the hour-and-forty-five-minute show. Before the band appeared, and further complicating space-time matters, there was a Wurlitzer jukebox onstage playing “Shake Your Money Maker,” the blues song recorded by Elmore James in 1961. And even down to its architectural details, the venue resisted placement in a specific period: the unpainted concrete floor and bare block walls of the 4,620 -capacity Sant Jordi Club somewhat recalled the cold yet efficient characteristics of Soviet Brutalism of the ’70s and ’80s. Were we not at a rock concert in the second decade of the 21st century? Or had we sneaked behind the Iron Curtain to show off our decadent Western culture, with our Levi’s, chewing gum and perverse rock ‘n’ roll?

But by the time the band took the stage and the brawny intro to “Twice As Hard”  was singeing the air, we knew exactly where and who we were: at a stop on the Black Crowes worldwide tour, comfortable in our role of middle-aged avatars of ’90s rock. The raison d’être of the tour is to celebrate the 30th anniversary of their quintuple platinum 1990 album, Shake Your Money Maker . And as promised, the band did just that, beginning the concert by playing, in order, all ten songs from the album. This fifty-some-minute segment of the show was pure streamlined efficiency. The only diversion from the studio recordings was Chris Robinson’s banter, in which he said, by my count, the words “rock” or “rock ‘n’ roll” five times, reassuring us of the geographic and temporal certainties that we were indeed at a “rawk” show. Still, on my watch, to Mr. Robinson’s infinite credit, his self-referentialism never resorted to splaying his fingers to make devil horns–not even once. 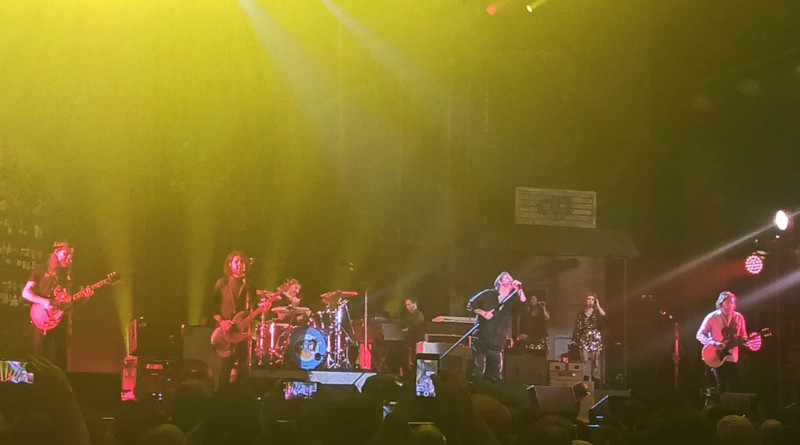 From the first song of the night to the last, Chris Robinson leapt and jittered, moving androgynously like Mick Jagger. On “Jealous Again,”  his max-effort, accomplished vocals strained through bursts of treble from Brother Rich’s Fender Telecaster, itself shivering above the rumbles of Sven Pipien’s bedrock bass line. When the organ notes of keyboardist Erik Deutsch reached rapturous heights on “Seeing Things,” the mellifluous contributions of backing vocalists Mackenzie Adams and Leslie Grant served as restoring forces, guiding the tune back to its lovely equilibrium. Just after the band finished hammering out the outro to the methamphetamine-tempoed “Stare It Cold,” the woman next to me said, in Spanish, “Man, this is still a kick-ass band.”  I agreed.

In what has become universal to most rock concerts, there was a crowd sing-along; tonight’s predictably occurred during the semi-acoustic “She Talks to Angels.” And why the heck not? The song was, after all, a mega-hit and is a rightful entry in the pop-rock canon of the past three decades.

Once Shake Your Money Maker was played in full, the show became less choreographed, perhaps refuting the notion that this Black Crowes tour is a mere cash grab or simply an exercise in nostalgia. The selections included songs from 1992’s The Southern Harmony and Musical Companion to 2009’s Before the Frost…Until the Freeze. Drummer Brian Griffin’s metronomic cadence was a foundation on which lead guitarist Isiah Mitchell assembled stretched-out solos in the course of a ten-minute rendition of “Thorn in My Pride.” Afterwards, the unmistakable chord changes and timeless lyrics to “Remedy” closed out the set.

Now all that was left of the show was the encore, David Bowie’s “Moonage Daydream,” which gave rise to boisterous cheering from the crowd and categorically reaffirmed that nothing has changed–except for the crow’s feet around our eyes. 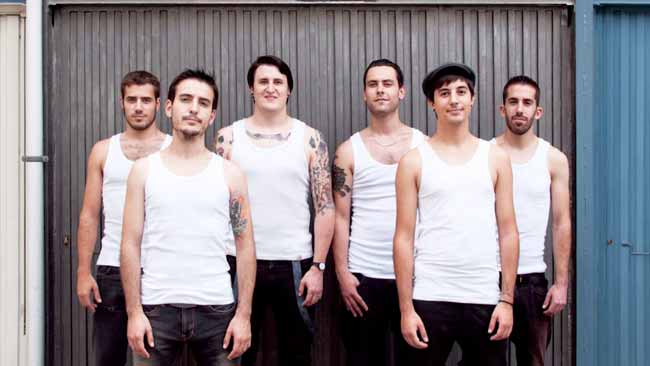 Singles Supremos: «Summer in the city» de The Lovin’ Spoonful